From assisting with Paralympics to sharing business knowledge, Jiading women lead the way 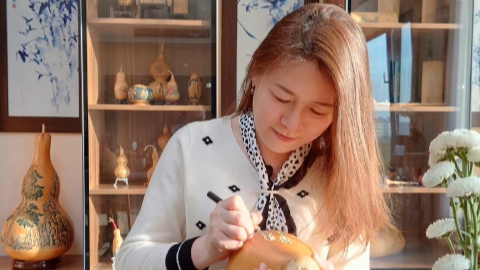 Paying tribute to Chinese women and their inspiring achievements in the new era!

Women are showcasing their leading roles in more fields, promoting the development of society with their achievements no less than men.

Traditional blue and white cloth passed on with new meaning

However, Hu Sufen, in Anting Town, has created her own edition of Shuey Rhon Rhon, using blue and white cloth. 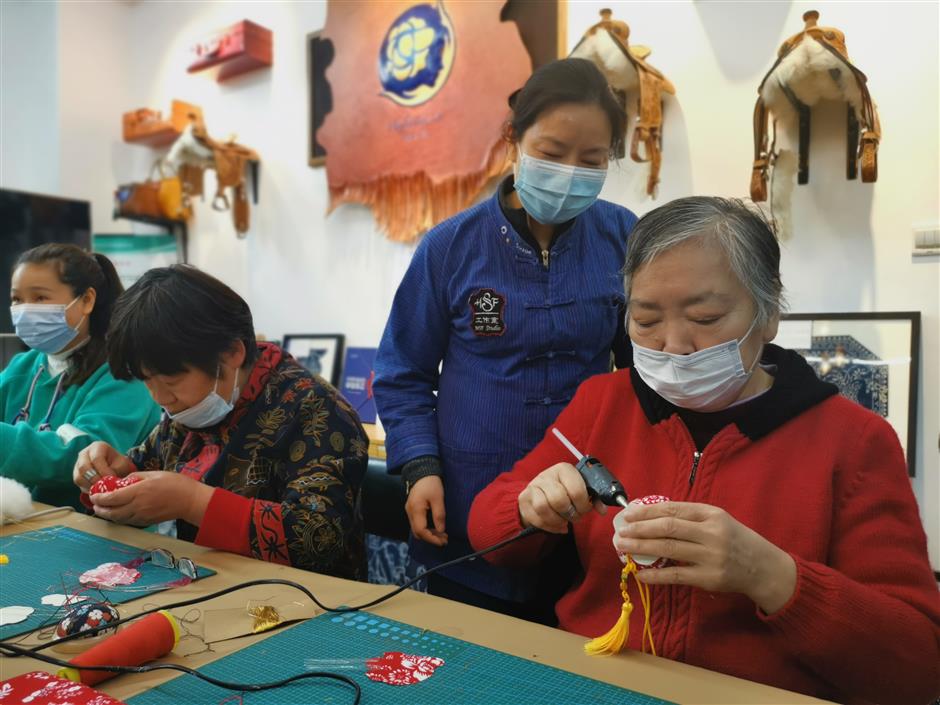 Hu Sufen (in blue) shows a resident how to make a blue-and-white-cloth Shuey Rhon Rhon.

Hu, an inheritor of traditional blue and white cloth art, invited her friends who are also skilled to make Shuey Rhon Rhon sachets for the winter Paralympic athletes.

She noted that she hoped more people would pay attention to Chinese traditional culture and intangible cultural heritage and it was her way to support the Winter Paralympic Games.

“We cherish this way to cheer for the Winter Paralympic athletes, and it is also a kind of learning and inheritance of Chinese culture and Jiading intangible cultural heritage, so we want to pursue perfection,” a resident surnamed Zhu said. 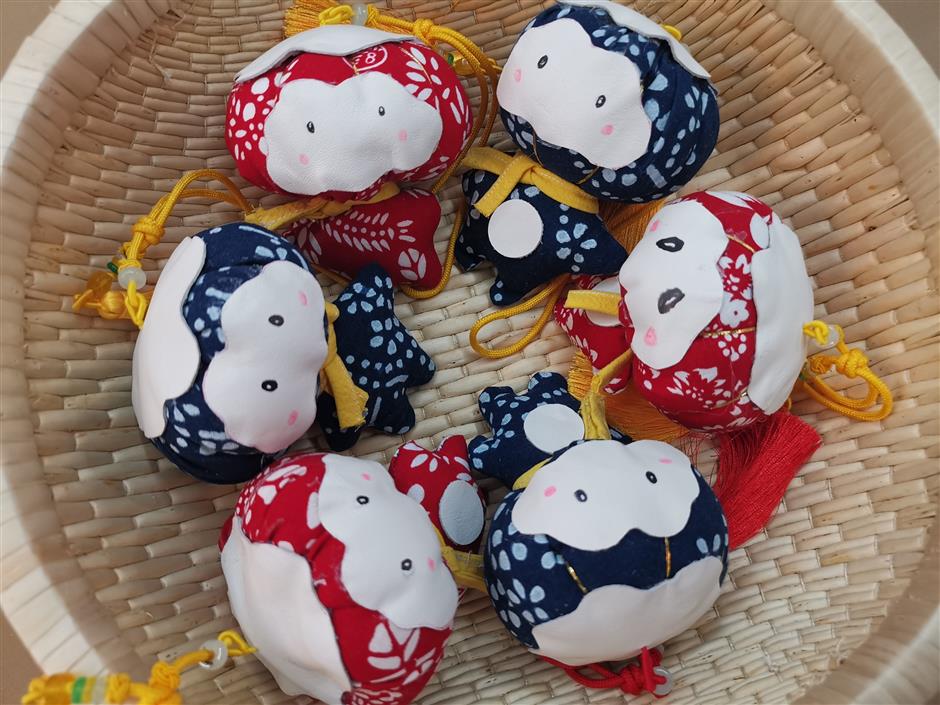 The Shuey Rohn Rohn sachets made by residents

Many retired women residents have engaged in the business. They use blue and white fabrics to make bouquets and decorations. While enjoying themselves, they also teach locals the craft, making the traditional handicraft prosper again.

“Now, those participants gradually grow into volunteers, teaching locals for free,” Hu said. “While better enriching the cultural life of Anting, they also hope that the traditional craft will be passed on from generation to generation.”

“Business is also a way to repay kindness” is often quoted by Zhou Hangwei, general manager of Shanghai ACE Webbing Co Ltd and one of the winners of Shanghai March 8th Flag-bearers.

In addition to her status as the leader of the enterprise, she is also a key opinion leaders online and a model for many entrepreneurial women.

“The competition in the business world is fierce and realistic,” she said. “You won’t be given any tolerance just because you are a woman. We have to pay more than men and adapt to the environment faster and better.”

Working online from home is Zhou and her colleagues’ answer to the COVID-19 pandemic. They set up their web portal and received countless orders online.

“Although we are small, we are sustainable,” Zhou said, never losing her faith when facing all sorts of challenges.

After graduating from university, Zhou came to Jiading with her husband and worked in a variety of fields including mechanical designer, quality engineer and legal manager.

She has been involved in business management for more than 20 years. In her words, she has enjoyed many opportunities along the way. Therefore, she wants to transfer her knowledge and experience to more women in need.

As the vice president of Jiading District Women Entrepreneurs Association, she has been engaged in providing entrepreneurial guidance and training for women’s teams of start-ups since 2016.

“There are many excellent entrepreneurs among Jiading women, but I see that they have also taken some detours in the process of entrepreneurship. So I want to share all my experience of many years in the business world with them,” Zhou said.

She was very pleased to see that many women have succeeded in entrepreneurship, sprouting and growing up from a seed. She will continue to do this job as long as someone needs it.

Over the past six years, there have been more than 200 beneficiaries. Zhou has maintained close contact with many of them, including Chen Yan, president of Jiading District Women’s Social Organization Development Center.

Chen said that in the process of enterprise development, the information and guidance provided by Zhou really made them avoid a lot of detours.

A friend of Zhou added: “She is like a fire, and there is always great energy in her.”

And over the years, Zhou has won many honors.

“My company has stood up by its own strength and mastered the core technology and the autonomy of the market. We will continue to walk healthily and happily in the future,” Zhou said. Zhou Hangwei carves on a gourd.

‘Special and sacred’ to be a torchbearer

“It was a great honor to be a torchbearer of the Winter Paralympic Games!” Zhou said. “This was a special and sacred time.”

Although the distance of the torch relay is not long, each meter embodies the determination of the torchbearer. Zhou was in high spirits when she was holding the torch.

“I was both nervous and proud,” she said.

As the 12th torchbearer of the Danbi Bridge, Zhou took over the torch.

Even though she had taken part in countless games, she worried she wouldn’t be perfect for the task.

In her opinion, the torch is a symbol of perseverance: People should have the courage to work hard and strive for self-improvement.

“When the torch is lit, my life is also lit,” Zhou said. “We will continue to relay and inherit the Olympic spirit, promoting sports among the physically challenged people.” 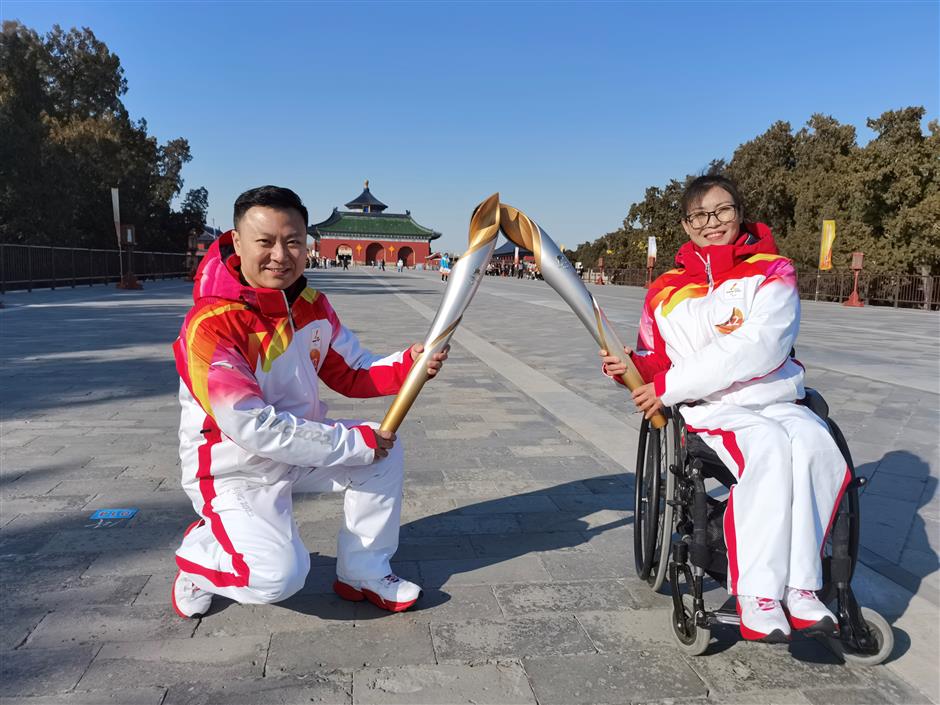 Wang Yanan was the 12th torchbearer at Yuanqiu in the park, where Chinese emperors attended the winter solstice ceremony in the park.

“When I received the confirmation letter, my heart beat faster,” Wang said. “I hadn’t been so excited for a long time.”

Wang said that she arrived in Beijing at noon on March 1 and discussed the relay with her fellow torchbearers almost the whole night.

She was so excited that she didn’t sleep well. Although the two girls met for the first time, they got on well and discuss the tacit for the next day.

“When I saw the torchbearer running toward me, I was a little bit nervous, but I anticipated the moment very much,” Wang said.

She added that when holding the torch, a sense of shouldering a mission arises, and there were no other thoughts. The joy in her heart was beyond words.

She revealed that she will participate in training in Shanghai to prepare for the world championships in May this year. 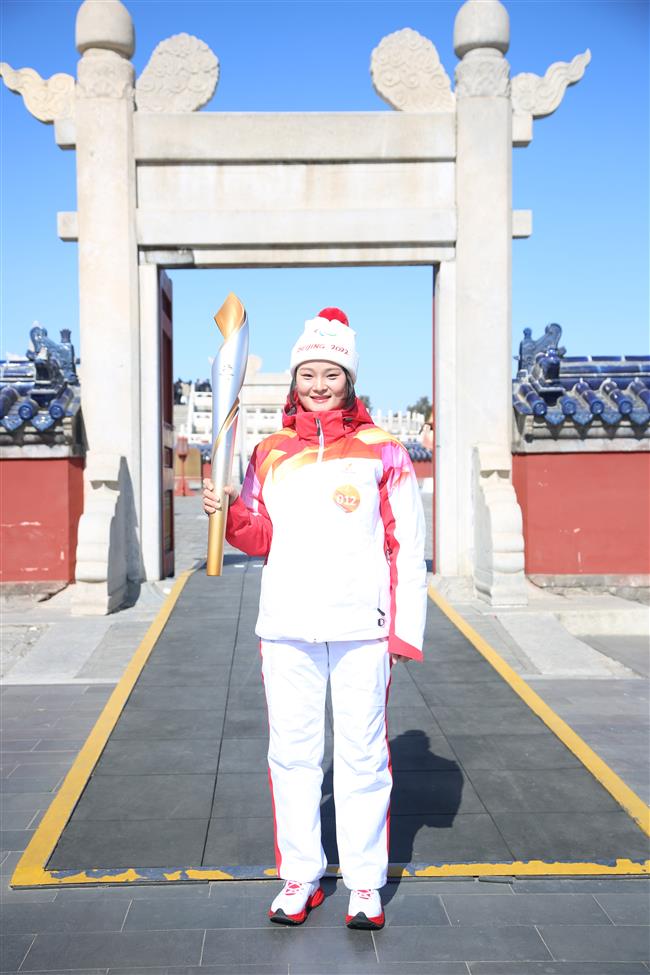