Google and Apple will not ‘easily’ give up app store business, analyst says 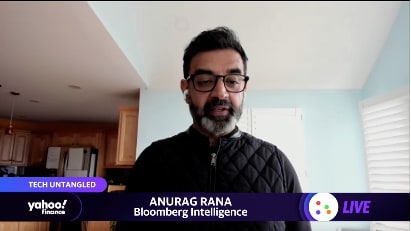 BRIAN CHEUNG: Welcome back to Yahoo Finance Live. Yesterday, Google announced a new deal with Spotify that gives Android users an alternative way to pay for the services. It allows them to choose between paying the app directly or paying through the Google Play store. This is a big deal, and we’re seeing some big movement in the shares of Spotify off of that news.

For more on this, let’s bring in Anurag Rana at Bloomberg Intelligence, senior software and IT analyst. Anurag, it’s great to have you on the program this morning. You know, the first natural question is, will this be extended to other apps that are on the Google platform? And then secondly, the bigger question here, do you think Apple is watching these developments as well?

ANURAG RANA: Yeah, I think those are very good questions, both of them. So let’s talk about Google for the first thing. They are experimenting with this. They will figure out how much of a loss it is to them, I could say per application. And then they’ll figure out how much can they extend it to the other applications out there. This is a very high margin business for both Google and Apple. They’re not going to give it easily. You’ll have to take this out of their hands forcibly.

So I think they’re trying to appease the regulators right now. But I don’t think it’s going to go away that easy. Now, as far as Apple is concerned, you know, given the stock reaction right now, I don’t think people assume that they’re going to do anything at this point. So even for them, given what we saw with a big battle with Epic Games, it’s not going to be easy to force them to change the way that they are selling their business right now.

AKIKO FUJITA: Anurag, it’s Akiko here. You mentioned this being about appeasing regulators. That is a big question whether, in fact, this action alone is going to be enough for lawmakers, who’ve been calling for these antitrust actions to say, look, these companies are acting without us forcing their hand. How do you see that playing out as a result of at least Google’s actions?

ANURAG RANA: So what’s going to happen is they’re going to experiment to see how many users actually leave the ecosystem and go outside to pay. So imagine that you already own an app, and you have an easy way to buy something within the app. Now that’s not the Spotify example. I’m just hypothetically giving another app, where you’re buying something instantaneously through the App Store, and you have to go outside the app, go into another area, put your information in.

That’s not a very user-friendly thing to do. So practically, you may not lose a lot of revenue, even if you let them allow them to do it. But I think Google is experimenting to see how that happens. And if the loss isn’t much, they may relax the rules a little bit more. It makes everybody happy, you know, maybe not the app providers in the end.

BRIAN CHEUNG: Is this a bigger loss for Google or a bigger gain for Spotify? Because what we do know about Google Play is that if you do, for example, subscribe to Spotify services, I think the stat is somewhere around 30% is the cut that Google will take out of that. So do we know, first of all, what percentage of the people that are subscribed to Spotify are using the Google Play? I guess, maybe this whole experiment will tell us how, but yeah, how does that break out?

ANURAG RANA: No, no, so the deal here is very simple, that for Spotify, the number of users will be impacted because of the fee reduction. So that’s going to happen. Now the question at hand is, if the revenue contribution or the revenue– I said that the loss of revenue for Google is much enough to make a dent. We don’t think that’s going to happen. But the real impact is the smaller companies, like the Spotifies, like the Match. They do have to pay a lot more. So they are the ones who benefit out of this not, so much of a big loss for Google or Apple, frankly, down the road.

AKIKO FUJITA: Not much of a loss– what do you– I mean, how much are we talking about in terms of revenue?

ANURAG RANA: Oh, I haven’t run the numbers because, again, it’s hypothetical as to how many of users will go away. I’d be very surprised if it’s even, like, you know– even if it’s 1%. I think it’s going to be far less than that.

BRIAN CHEUNG: Yeah, and then lastly, I mean, I guess– sorry, go ahead, Akiko?

AKIKO FUJITA: No, no, Brian, go ahead.

BRIAN CHEUNG: Oh, sorry. Yeah, I was just going to ask. I mean, when we talk about the importance of the way that these types of things are onboarded, I mean, is there any sort of difference in the way that Google engages people who are doing payments on the app, as opposed to those on iOS? Is it often the case that there are prompts, for example, on iOS that would try to get you to use the Apple platform, as opposed to just sign up for the service outside of your mobile phone? Is there any sort of differentiating factor between those two things?

ANURAG RANA: See, right now, it’s very seamless for both of them. It makes it very easy for anybody to sign up very quickly using their individual payment methods. Now, they are experimenting with it. So Apple will allow, for example, somebody who has a media app to go outside the ecosystem, sign in through a website, and pay from there. But that’s a very, very clunky way of doing it. You can’t seamlessly do it while you’re actually within the app. So, you know, just the nature of how the transaction happens, it’s so much better if you’re doing it on the platform, within the billing system of the platform.