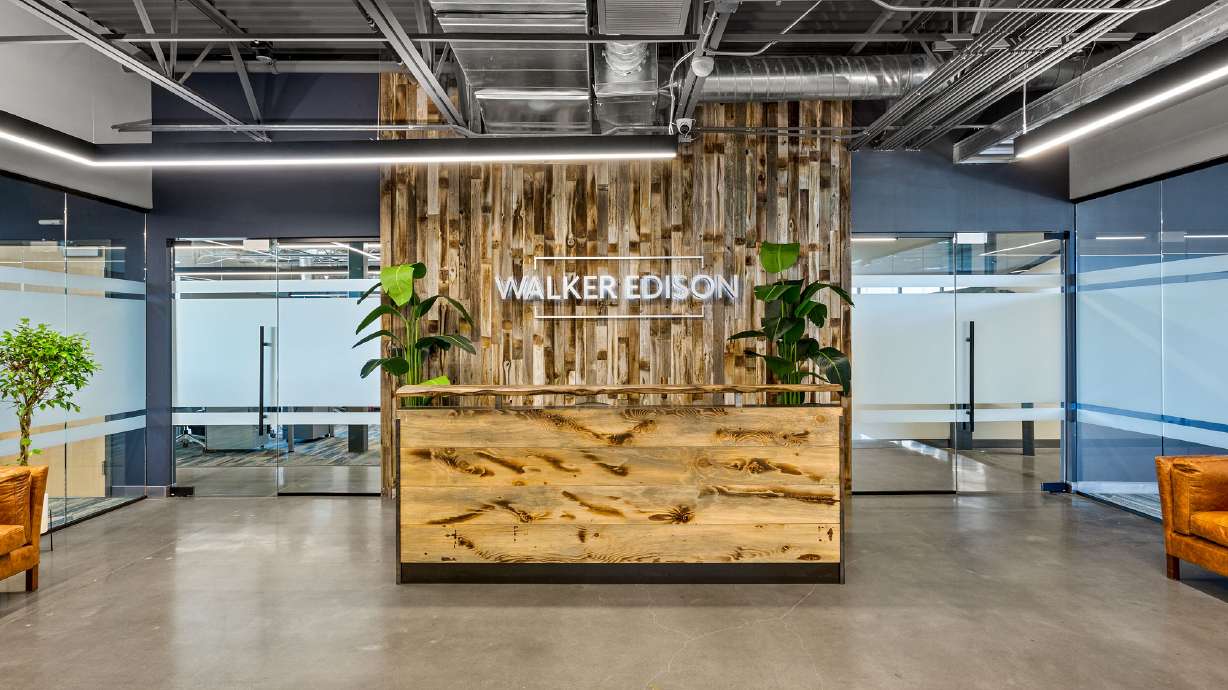 WEST JORDAN — Brad Bonham grew up in a family of entrepreneurs but he still describes falling into what has become a highly successful business as “a little bit of a fluke.”

“I was selling gift baskets and gift products into Walmart retail stores,” he said.

Selling these products taught the CEO and co-owner of Walker Edison the power of leveraging a much larger retailer’s consumer base for his own business ventures.

This experience and knowledge eventually led the then college-aged Bonham to the Canton Fair in China — the country’s oldest, largest and most representative trade fair — where he scoured for additional products to sell in Walmart stores.

“We found this piece of knocked-down furniture and I’d just purchased the same thing from Best Buy for like, 250 bucks. When the factory owner told me the (original) price, I was like, ‘Holy cow, somebody made that much money selling me this good through Best Buy?'” Bonham recalled.

With that, Bonham ordered a container of furniture “on a whim” with his father being his first financial backer, paying for the first few containers of product and setting in motion what would in 2006 become Walker Edison, a Utah-based e-commerce manufacturing business that provides high quality, ready-to-assemble home furnishings, shipped straight to consumers’ doors.

After a decade of being named to Utah Business’ 50 fastest-growing companies in the state, Walker Edison this month was named by World Trade Center Utah and Utah Gov. Spencer Cox as Utah’s International Business of the Year.

“We’re grateful for your business operations in Utah and recognize your fast-paced international business growth. Your team and capabilities have grown, and so has your brand in the global marketplace,” Cox said in a statement to Walker Edison. “Thank you for your Utah headquarters and for your corporate citizenship — for giving back generously to the state’s communities and causes.”

Bonham isn’t shy about the fact that he entered the e-commerce business at the ideal time.

“If you go back, maybe even in the history of when you should’ve started an online home furnishings business, I just happened, by pure luck, to choose the correct time to bring some of these items in,” Bonham said. “Now the marketplace is pretty saturated with a lot of different vendors. Back then, these major retailers were really kind of desperate for more product on their websites.”

Although he got into the business at a good time, it still took work for Bonham to expand his business into different markets.

Especially since Bonham said that the local investment community never considered his business of selling furniture on the internet “super sexy.”

“I had to build this business just through retained earnings,” Bonham said. “Any dollars that we made, my partner Matt Davis and I, rolled those dollars back into future inventory purchases and we did that for more than a decade.”

To take the business to the next level, Bonham launched what he called “Operation Moneyball,” drawing inspiration from the 2011 sports drama film, where the Oakland A’s manager uses analytics to run his baseball team and make personnel decisions.

“I had my management team write every question that they didn’t know the answer to on our conference room board,” Bonham said.

Within two hours, the board was filled with questions related to inventory stock, margins by channel partner and a wealth of other unknowns.

“We didn’t know a lot about our business, it just so happened that we were in a really high gross space and our stuff sold well — it was pretty unsophisticated at that point,” Bonham said.

These unknowns led Bonham to onboard with American Fork-based Domo, a business intelligence software company that allowed Walker Edison to use an aggregation tool to access data.

“The moment we leveraged analytics in our business, data became the focal point of how we made decisions (and) that’s really when it took off,” Bonham said.

Now, Bonham said Walker Edison has sourcing offices in southeast Asia and Brazil, warehouses in Canada, England and Germany along with a sales and marketing office in London.

Lessons learned and looking ahead

Being named as Utah’s International Business of the Year means a lot to Bonham, he said.

“It kind of validates our concept that it wasn’t just a business plan for us here in Utah or us here in the United States domestically,” Bonham said. “We know how to do business cross-country and develop and market products that meet the needs and demands of those in other places.”

To reach this accomplishment, Bonham said that he invested heavily in company culture, referencing the saying, “culture eats strategy for breakfast.”

“I totally subscribe to it because if you have a terrible culture, nobody wants to work for you and that means your output is pretty low,” Bonham said. “If people love working for you and it’s not a chore when they get up in the morning, they’re motivated to succeed and that’s really what we want.”

That mindset has permeated throughout Walker Edison and Bonham said that culture is the thread that binds the company together.

“We now sponsor dozens of charities,” Bonham said. “Every single person in the company gets paid to take time off every quarter and we line up specific charity events that are brought to us by our employees and it has made all the difference in the world as a culture building exercise.”

Despite the recognition and success, Bonham said that he still sees “a lot of runway” for domestic business in the U.S., but that the fastest growing business segments are overseas.

The moment we leveraged analytics in our business, data became the focal point of how we made decisions (and) that’s really when it took off.

“In the (European Union) and in Canada, we continue to seek out opportunities where there’s an infrastructure that will allow a business like ours to succeed,” Bonham said, adding that they have hundreds of employees spread across the world.

“I think the demand for our products and the way we go about marketing and developing and selling those, it has been a proven business model now to where we’re one of the very largest consumer product companies in the state,” Bonham said.