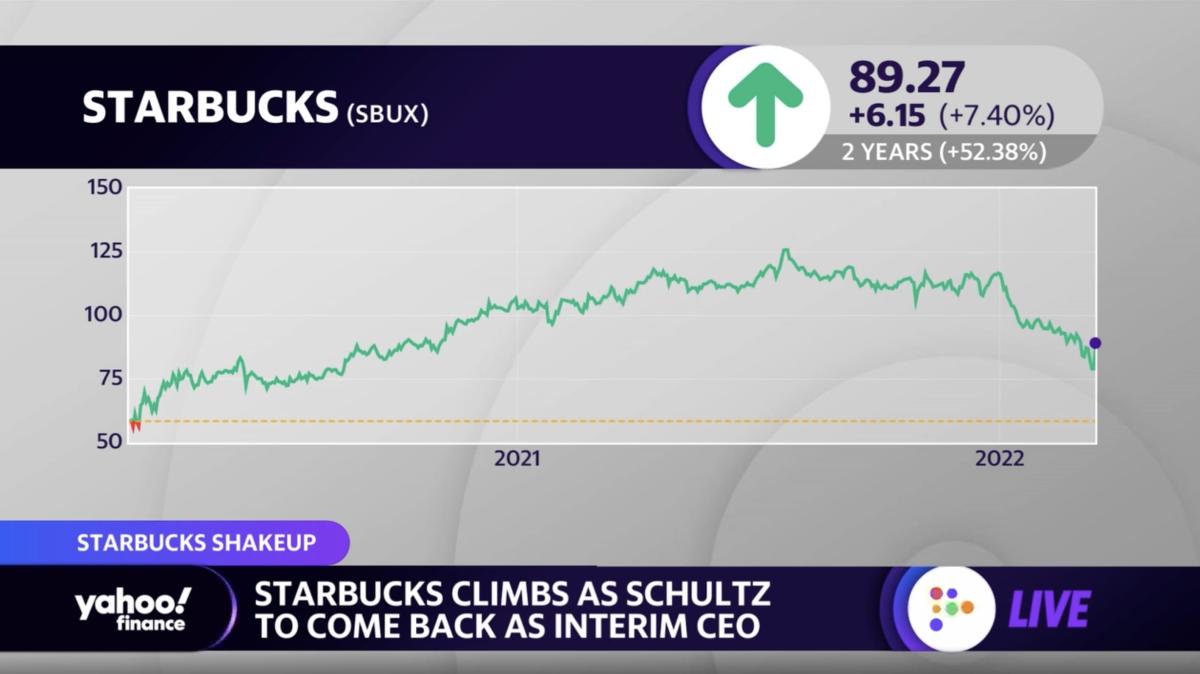 EMILY MCCORMICK: Welcome back. Starbucks is shaking up its management yet again. The coffee chain announced CEO Kevin Johnson will retire and Howard Schultz will return as interim chief. Here with the timeline and with more, we have Yahoo Finance’s own Brooke DiPalma joining us now. Brooke, break this down for us, especially now as we see these shares moving higher intraday on the heels of this news.

BROOKE DIPALMA: That’s right, Emily. This is really a twofold story here. Of course, Kevin Johnson, current CEO of Starbucks, announcing his retirement, effective April 4. But Kevin’s been with the company for 13 years, serving as CEO since April of 2017. He’ll continue to serve as the CEO until that April 4 date, but in addition to that, he’ll also be a partner and special consultant, as well as serve on the board of directors, through September.

Now, in the letter to all Starbucks partners, Kevin noted that this opportunity has been a gift, and that a year ago, he did signal to the Starbucks board of directors that he would consider a retirement toward the end of the pandemic. Now Howard Schultz jumping back into the role as interim CEO. He’s former longtime CEO and founder of Starbucks. And interestingly enough, he will return with a salary of just $1. He says that he is volunteering his time. That’s according to a release from Starbucks.

Now they also noted that they’ve hired executive search firm Russell Reynolds Associates last year and intend to choose a new CEO by the fall. Now, I do want to take a closer look at the timeline of Schultz back at Starbucks. Of course, he’s going to be interim CEO. But he’s obviously a longtime loyalist to the company that he bought back in 1987. That is, he was then CEO from 1987 to early 2000. He then took Starbucks public in 1992, only to return again in 2008, as CEO at Starbucks.

And now 2022, Schultz is back at the helm of Starbucks. And he said in the release that he did not plan to return to Starbucks, but he knows that the company must transform once again to meet a new and exciting future, where our stakeholders mutually flourish, he said, in the release. Now, according to the release, he plans to focus on innovation framework and help onboard the next CEO. And Emily, as you noted, shares of Starbucks popping this morning during intraday trading, but this comes at a time where Starbucks is a bit of a transitional form.

You know, of course, laborization pushes are happening across the country. As of this week, there are currently more than 120 stores across 26 states that have filed union petitions with the National Labor Relations Board. And as of early March, there are now six company-owned stores that have successfully formed a union. Now just this week, the National Labor Relations Board issued a complaint against Starbucks, accusing that it retaliated against two employees in Phoenix that looked to unionize. So Howard Schultz certainly stepping into, yet again, another important, crucial, pivotal moment at Starbucks.

EMILY MCCORMICK: Brooke, we’re going to have you stick around as we bring in Morningstar analyst Sean Dunlop for more on the outlook for Starbucks amid this news. And Sean, I first want to get your immediate reaction to this morning’s announcement. The stock is up intraday, as Brooke was just mentioning. Was this a surprise to see a change at the top?

SEAN DUNLOP: Yeah, it’s not terribly surprising. We’ve seen that across a couple of brands. I mean, Rich Alison is stepping away from Domino’s. We’ve seen Gene Lee stepping away from Darden. I think a big part of it was the leaders of these brands sticking through the worst effects of the pandemic and a really challenging inflation environment, both in labor and commodities. Now that those are starting to wear off, it makes sense that Kevin would step away in what was probably a move planned for about a year ago initially.

BROOKE DIPALMA: And Sean, back with Howard Schultz at the frame, he said– at the helm, rather– he said he aims to focus on innovation framework. What are you hoping to expect from Schultz in this position on top of those unionization efforts really taking a helm on Starbucks right now? What’s your hope for him in this new role?

SEAN DUNLOP: Yeah, I think the big thing is going to be stability. It reads like a move that is working towards engendering stability with a brand that’s seen a lot of trouble in the press over the last couple of weeks and months. The unionization effort is not actually huge at this point. So you think about, I believe 120 stores have voted– or have organized– voted to organize. Only six have actually succeeded. But that’s only 1.5% of 9,000 stores in the company owned footprint.

And as you start working into the math, you usually see about a 20% to 25% wage bump explicitly from unionization. And if you look at sort of the BLS averages for Starbucks, that gets you to about $17.07 or only 4% higher than the wage hikes they have planned for the summer already. So what Howard offers is, he’s an icon in Starbucks lore. It’s very stable and strategic continuity. That’s what the move reads to me as, and working towards sort of getting Starbucks out of the press in such a negative light in a way that could potentially affect the brand, where we don’t think that the unionization move probably will have meaningful financial repercussions.

BRIAN CHEUNG: Sean, I mean, when you talk about continuity, this does sound like a conduit for finding a permanent replacement. Now I don’t need you to speculate necessarily who’s going to take that spot because the news is so fresh, but I mean, what do you think is going to be the eye of what the board is looking for in that leader, given the issues that you kind of highlighted that are immediately confronting the business?

SEAN DUNLOP: Yeah, it’s a good question. I think as you look forward, you think about China as a growth market and maintaining sort of that narrative amidst very uncertain geopolitical backdrop. You think about managing inflationary pressures and commodity costs and labor and managing labor relations. Those are going be kind of the challenges that face the new CEO. So for Howard, what he’s doing is basically bridging this two-quarter, two fiscal quarter period, to sort of assuage market concerns as they look for a replacement to address those.

But as you think about Kevin’s tenure, he came in basically to digitize the brand. His track record was with Juniper and with Microsoft. He came in to modernize the estate, adding new format stores. He came in to increase the firm’s digital chops and invest in the loyalty program. They’ve done all that. And actually, as you look at Starbucks’s performance against the category, their comparable store sales are up about 12% on a two-year stacked basis against 2019. And that’s against about a 7% to 8% decline in the specialty cafes segment more broadly. So I would say with COVID-19 as the litmus test, it has been a successful tenure.

BROOKE DIPALMA: And Sean, I want to dive into that loyalty program here. Of course, Howard introduced that. It was one of the first, really, for the restaurant chain industry overall at large. What exactly do you think is the next opportunity there as far as AI technology, digital innovation, and ease for customers’ experience at Starbucks under Howard Schultz returning?

SEAN DUNLOP: Yeah, loyalty programs in general offer a lot of very attractive levers. You think about 25 million members that spend two to three times what they spent before they joined that program. A big part of that is going to be suggestive selling. Maybe it’s getting you to add an egg bites order to your coffee in the morning, or maybe it’s getting you to upgrade to a premium cold beverage in lieu of a hot coffee. Other things that you see is they start doing cross daypart promotions. Maybe you get $2 off a drink if you come back in the afternoon. And those should continue to be upside levers over time.

EMILY MCCORMICK: And Starbucks has said it plans to continue raising many prices after already raising them on October 1 and January 1, most recently. How much pricing power do you think this company is going to have, especially as we see prices for a variety of goods and services now across the economy continuing to move higher?

SEAN DUNLOP: Yeah, that’s really the question, isn’t it? For now, they’re in a category of one in the specialty cafe category. So for Starbucks, your average guest check is about $7.80. That’s about twice what you see at Dunkin’ and about four times what you see at Tim Horton’s. So it makes sense that they’d be able to price sort of on the premium side of the menu, take those prices surgically.

Longer term, for now, it works because the category inflation has been so broad. So you look at restaurant inflation across the industry, and you see about 6%. You look at grocery store inflation, it’s about 6 and 1/2%. That helps sort of alleviate the pressure that we would otherwise see, but longer term, assuming wages don’t catch up, that’s where you could potentially see customers trade down the menu or trade out entirely.

BRIAN CHEUNG: Yeah, and that labor part of the puzzle is a big reason why the unionization is going to be such a big story for them. But Sean Dunlop over at Morningstar, as well as Yahoo Finance’s Brooke DiPalma, thanks so much.