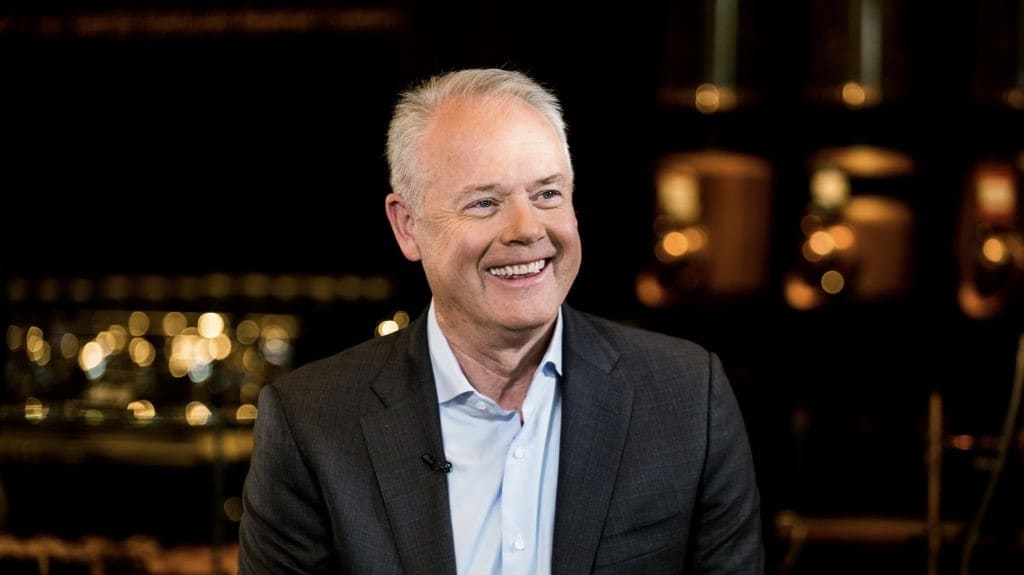 JARED BLIKRE: Welcome back. Shakeup in the C-suite over at big coffee. We’ve been talking Kevin Johnson out as CEO as Howard Schultz returns to take the top spot, having served as executive chairman in the interim. Mike Halen, senior restaurant analyst with Bloomberg Intelligence, joins us now. And Mike, thanks for joining us on this very short notice. Interesting moves being made here.

And I just want to ask you, you’re writing for Bloomberg Intelligence today, saying, the board expects to select a new leader by the third quarter. We are confident Starbucks can attract– excuse me, attract top talent due to its strong competitive position, as the company’s founder, Schultz, is a great alternative to Johnson for onboarding the next CEO. So I’m just wondering, was this telegraphed in any way, or is this kind of out of the blue?

MIKE HALEN: No, it wasn’t telegraphed at all. So it definitely surprised me this morning. It definitely impacted my workflow and kind of what I thought I was going to be working on. Yeah, so they announced this ahead of the annual meeting.

You know, what the board had said was that Kevin Johnson had been planning to retire, that he had notified them about a year ago that once, you know, he felt comfortable with the company’s position post-pandemic, that he’d be looking to move on and that, you know, they’ve been kind of doing some succession planning since he mentioned it. But there hasn’t been any indication, so it definitely caught myself and other investors by surprise today.

BRIAN SOZZI: Mike, do you think Howard Schultz is able to stop this union movement at the company?

MIKE HALEN: You know, I don’t think so. I think, you know, the union really has Starbucks in its sights. They have a lot of momentum. I think this is moving a lot faster than most investors maybe predicted. You know, because historically, restaurant employees haven’t been interested in unionization. They haven’t been interested in paying the dues. It’s a very transient workforce. They typically look at it as kind of a short-term job as opposed to a career.

So historically, you know, unions haven’t had much success in the restaurant business. So I think expectations were that this would move along very slowly and would take quite some time. And I think it still will, but, you know, there has definitely been more movement in this direction. There’s been a lot more stores that are seeking to unionize than I think most investors have expected.

JARED BLIKRE: And Mike, not to overshadow the other big Starbucks news of the day, which we’re going to talk about anyway, now the show has a lot more Starbucks coverage than originally intended, but those cups, those Starbucks cups going to be a thing of the past. How does this impact the business?

MIKE HALEN: Yeah, so it should save them some money in the long-term. I mean, paper and packaging costs have been skyrocketing over the last year for the QSR chains that we work with. You know, also, obviously, ESG has become more important over time. And, you know, this may help their ESG scores. So, you know, I think this is a net positive in the long-term.

BRIAN SOZZI: Mike, hang with me here as I run through this. Now Jim Donald, he was booted out many years ago, and then Howard Schultz came back. Ultimately, Schultz handed that chip off to Kevin Johnson. Now Howard Schultz is back. There has been other executive departures at the company in recent years. I believe the CFO left. You had Ross Brewer take the top job at Walgreens. Is there a succession problem in this company, where they’re not able to get it right? I mean, to see Howard Schultz here coming back again, I’m sure it’s a good move for shareholders, but still, I mean, it has to speak a lot about how these things are planned inside the company.

MIKE HALEN: You know, listen, I think they have a deep bench. And, you know, to say that they haven’t gotten it right, I think might be a little harsh because, you know, Kevin Johnson’s done a great job. I mean, this company is in a very good spot. Listen, you know, margins are getting squeezed right now, but they are across the industry. You know, Kevin Johnson did a phenomenal job in terms of expanding the digital advantage that they have, right?

And now quickly shifting to drive-thrus business and closing stores and opening up more drive-thrus and pick-up only locations very early on in the pandemic has been a very profitable shift for them. You know, more than 50% of their spend is coming from loyalty members, which– who tend to spend way more because, you know, only about 25% plus of transactions are coming digitally. So, you know, Kevin Johnson had a very, very good run here at Starbucks. Like I said, it’s a little unexpected. You know, but we can’t really throw any shade on anything he’s accomplished. I think he’s done a phenomenal job. And–

MIKE HALEN: You know, I mentioned in my report, I think they’re going to– I think this is a great place to work, right? I mean, just because of their size, they can offer– you know, let a CEO name his or her price. And, you know, it’s a great company that’s had a very long track record of success and that’s positioned very well right now. So I think this is a very, very attractive job for some of the top notch candidates that might be out there.

BRIAN SOZZI: Yeah, and that was my last question here, Mike. Now this search for a new CEO will play out until fall, but let’s look at that Starbucks board. On there is now the CEO– or now the former CEO of Domino’s Pizza, Rich Alison. He just retired about a week and a half ago, two weeks ago. Also former McDonald’s chief marketing officer, Mary Dillon, the well accomplished now former CEO of Alta. Do these two executives get a look?

MIKE HALEN: That’s a great question. I’m not really sure. In terms of Rich Alison, he may want a break, man. I mean, I think a lot of the CEOs that are in the business may need a break. The pandemic, you know, has created a lot of turmoil, and the restaurant industry was completely turned upside down, as you know, two years ago. And, you know, a lot of these CEOs and C-suite management teams have been working really, really hard with skeleton crews at some places. So I’m not sure if Rich is looking to jump right back in anytime soon. You know, and I don’t really have any comment on who I think may be a good replacement.

JARED BLIKRE: All right, well, we appreciate you sticking your neck out there and coming here on short notice. Mike Halen, senior restaurant analyst with Bloomberg Intelligence.