‘We are all trained in hygiene’: Hairdressers strike back at lockdown rules

Hair salon owners are struggling to understand why they are not allowed to operate under lockdown, saying they are arguably among the most hygienic industries, sticking to strict health and safety protocols already. If they can’t start operating soon, they’re worried about having to close their doors permanently and let staff go, some of which support extended family members.

Since lockdown started on 26 March to slow the spread of Covid-19, hairdressers were among the industries not classified as essential services. From Monday, when Level 3 of lockdown kicks in, more sectors will be able to start fully operating such as mining, manufacturing and retail. About eight million people will be able to return to work. But hairdressers, beauty services and tattoo and piercing parlours will have to wait a bit longer before they can start trading again.

A group of hairdressers even lodged an urgent court bid to be able to operate during lockdown, but this week the Western Cape High Court dismissed the application, News24 reported.

At a briefing on Thursday, Minister of Cooperative Governance and Traditional Affairs, Nkosazana Dlamini-Zuma, said that government was in discussions with salons to determine how to incorporate social-distancing measures in their spaces. Once this has been resolved, government will put in place new regulations allowing them to operate under Level 3, the minister explained.

“People don’t realise, part of our industry training is hygiene. We are all trained in high levels of hygiene,” said Lorinda Janse van Vuuren, who owns a salon which operates from Sierra Square Hotel in the north of Johannesburg.

Janse van Vuuren also said hairdressers should be able to maintain the required distance apart between clients. She is in the process of getting so-called “sneeze screens” to put up in her salon to act as a barrier between clients.

“There’s talk we might only be able to open next year. That scares me. A lot of salons are closing at a phenomenal rate,” she said. These salons employ a range of people including hair stylists and nail technicians.

During this period especially, Janse van Vuuren said it was important  for her to be loyal to her six staff, who have been with her for “years and years”.

Janse van Vuuren said that the UIF benefits helped with staff salaries. She is also a beneficiary of a loan from the South African Future Trust, which has helped. The Trust, established by Nicky and Jonathan Oppenheimer, is meant to benefit small and medium enterprises impacted by the pandemic. Her landlord, who owns the hotel where she operates, has also been understanding and has not pressured her to pay full rent. She pays what she can.

But some salon owners have not been as lucky, she said.

Her salon has opted to sell beauty products to raise secure some cash flow. “Our skincare and retail sales have gone through the roof, to the point where we have got nothing to sell anymore,” Janse van Vuuren said.

The salon has also introduced a voucher system to get some income. Clients can buy a voucher to be used once salons can start operating again. While they might have cash inflow now, the danger is that they won’t get cashflows when they start operating because clients will be using the vouchers.

Janse van Vuuren is worried about the ripple effect of not being able to operate on staff, and their families. The basic salary is already low and they rely a lot on commission. This is particularly hard for single mums who work in the industry, she lamented. Hairdressers have started collecting food parcels to support each other.

Dean Karageorgiades, who runs a distributing business, said that his sales had declined significantly. He now only distributes shampoos and conditioners. Normally his big sales come from colours. Karageorgiades has been in the business for 25 years and imports products which can only be sold in salons.

“We are making a little turnover, but nowhere near than what we normally do,” he said. He is also worried about his staff, some of whom rely heavily on commission. “The entire industry supply chain is being affected by this (lockdown).”

Hair salon owner Lorinda Janse van Vuuren believes it is possible for hairdressers to adhere to the required social-distancing measures and other rhygienic standards to be able to operate safely under lockdown. She intends to install sneeze screens in her salon to create a barrier between clients (Photo: Supplied).

Karageorgiades said it is “short-sighted” of government to allow certain industries with high risk potential for infection to open ahead of hairdressers which operate in a hygienic environment. “Most salon chairs from centre point to centre point are almost two metres, or more, apart,” he said. Those in the beauty industry also often have to wear face masks, he added. “Part of the training is to learn sterilisation, sanitation and disinfection,” he said.

“At end of day it has a serious impact on people’s livelihood. Most hairdressers live hand to mouth,” Karageorgiades said. Salon owners are not sure if they will be able to open doors again, they will have to do with fewer clients because of social distancing measures. There’s also a possibility of losing out on clients who may be fearful of their safety and might not opt to go to salons because of Covid-19.

Lynne Corby, the owner of Sculptures Hairdressing in East London, recently celebrated 26 years in the business, but she’s worried she’ll have to close if the hairdressers are unable to trade. “If it carries on much longer, I will have to close my business,” she said.

Corby opened Sculptures in 1994, and officially celebrated 26 years in the business on 5 May. “I’ve had the privilege of training many girls,” she recalled.

“I started with just three staff members; it gradually grew,” said Corby, who had employed as many as 22 people at one stage. Some of her former staff have even gone on to open their own salons. The lockdown has been difficult for her staff, who Corby says are like her family. She’s already had to let go a staff member from a recently opened barber because of the lockdown.

When lockdown started, Corby said her staff took a collective decision not to operate at all – this while some hairdressers have undertaken “underground work”. “We know that we are being watched very carefully. We want to be an example,” said Corby.

While they can’t do any styling, Corby started selling tailor-made colour kits to clients in an effort to raise income to repay her suppliers. She’s had to rely on the Unemployment Insurance Fund’s (UIF) Covid-19 benefit to pay 12 of her staff. She had to pay her remaining six staff who do not qualify for UIF benefits out of her own pocket. 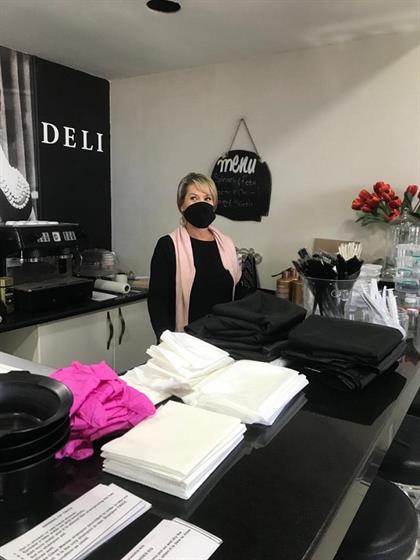 Corby said that she is lucky to have bought her own property, and her bank has given her a payment holiday on her bond. “If I were with a landlord I would be closing my doors right now, and have to put my staff on the street,” she said.

Her salon has also relied on the generosity of some of her clients, who have decided to pay for the hair appointments they had already budgeted for. “I have been overwhelmed by the love and support … they know there is a chance we can go down. It’s been humbling,” she said.

Not just about hair

Corby said that hairdressers contribute to the well-being of their clients. “People call me the psychologist. We are there for them [clients] in more ways than one. Hair is just a little part. It’s the talking, and the touch. That’s the thing people are missing,” she said.

There have been positives – in that the hairdressing fraternity, which is normally competitive, has instead decided to pull together during this time. It’s also been good for them to rest. “But we’ve rested enough now, we want to go back!” she said.